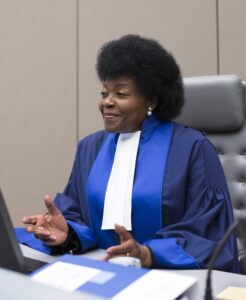 Hon.  Lady Justice Joyce Aluoch, EBS, CBS, (Retired) is a former Judge and  First Vice-President of the International Criminal Court at The Hague, The Netherlands.

Prior to that, she was a Judge of the High Court and Court of Appeal in Kenya, having been appointed the second woman Judge in Kenya.

She holds an LLB Degree from the University of Nairobi, and Diploma from the Kenya School of Law. She has a Master’s Degree in International Affairs (GMAP), from the Fletcher School of Law and Diplomacy, Tufts University in Boston, which granted her the Distinguished Achievement Award in April 2015, and in September 2018, the same University awarded her its top Award, ”The Class of 1947 Award” (honoris causa ),making her the first black person to receive  such an honour to only bestowed on one who has embodied the school’s mission and its founding ideals throughout their career.

Justice Aluoch has successfully moved her legal profession to other forms of Alternative Dispute Resolution mechanisms, namely, Arbitration and Mediation. She a Certified Mediator, International Mediation Institute (IMI), and Accredited Mediator (Centre for Effective Dispute Resolution London). She a member of the Chartered Institute of Arbitrators, London, and the Kenya branch, the International Council for Commercial Arbitration (ICCA) Peace Palace, The Hague, Nairobi Centre for International Arbitration and African Arbitration Association.  She conducts mediations under the High Court Annexed Mediation program, Kenya as well as FIDA-Kenya, and private mediations. She is an Accredited Trainer for Foundation Mediation Skills of the Strathmore University Dispute Resolution Centre.    She has recently been appointed a Board Member of Mediators Beyond Borders International, the Chair of the Advisory Board of the newly formed Africa-Asia Mediation Association, and Patron of Kisumu Mediation Centre.

Jill’s is a researcher on civil society and social movements, with more than thirty years of experience across the world in civil society, south-south cooperation, community mobilisation and women empowermnet. She is partly based in Tornanto and partly based in India.. Jill has worked at the grassroots level as well as at the policy and research level on environmental issues, eco-health and its impacts, gender and women’s equality, and land and resource rights. She has also done extensive training and networking with community groups in Asia, Africa and Latin America on nonviolence, peace and equity issues. Jill is also completing her doctoral dissertation on Gandhi’s Nonviolence in Educational Leadership from the University of Toronto, Canada.